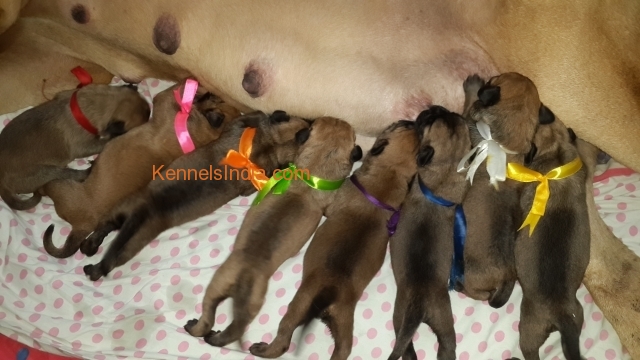 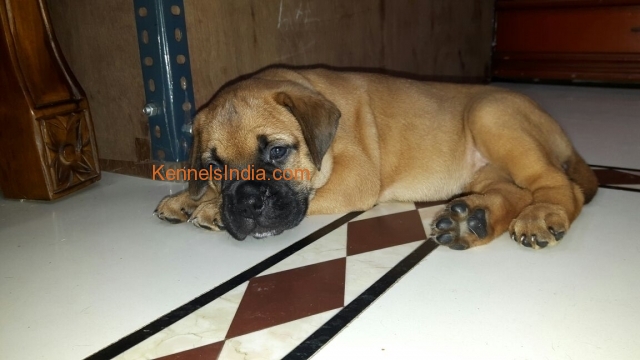 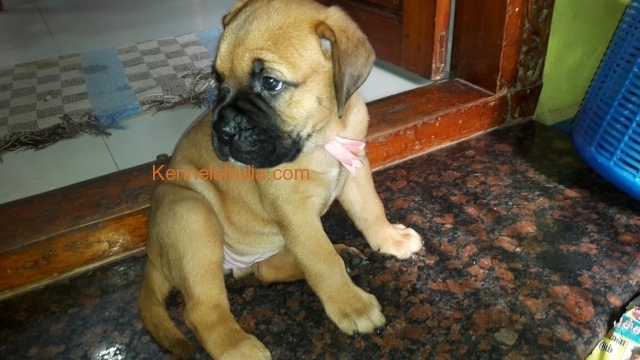 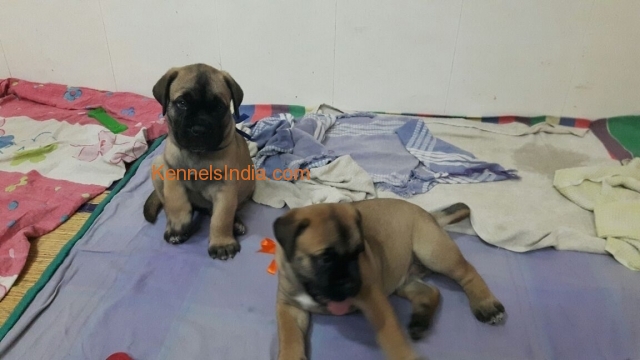 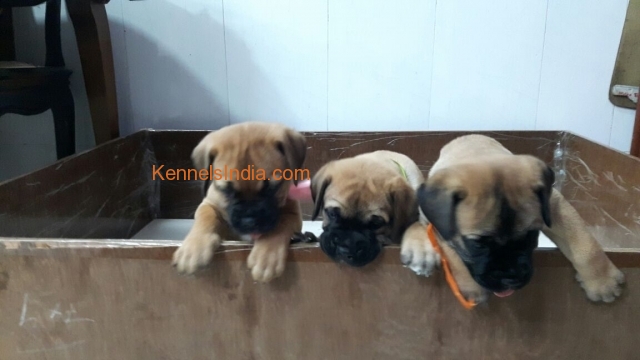 Bull Mastiff Puppies for Sale.
Totally 8 puppies. 4 Male and 4 Female.
Puppies are well weened, KCI registered and will be given after first vaccination.

Country of Origin
The Bullmastiff was bred in England by crossing the English Mastiff with the Bulldog. Such crosses were mentioned in documents as far back as the 1700’s, but the modern Bullmastiff likely derives from later crosses in the late 1800’s. Wealthy estate owners bred the dog to chase down and fight off game poachers, taking speed from the Bulldog stock and strength from the Mastiff. The targeted mix was sixty percent Mastiff and forty percent Old English Bulldog. The Bullmastiff was originally bred with a dark coat to serve as natural night camouflage (then called the ‘Gamekeeper’s Night Dog’), but fashionable light coating was later preferred when the breed began serving as estate dogs for the upper class. The Bullmastiff was recognized by the American Kennel Club in 1933. Famous Bullmastiffs include Rocky’s dog ‘Butkus’ and the title character from the film ‘See Spot Run’.

Size
The Bullmastiff has a shoulder height of 61-68 cm (24-27 in) and weighs 45-60 kg (100-133 lbs). The Bullmastiff has a large, wrinkly head and a short, wide, dark muzzle. It has a dark nose with wide nostrils and round, amber eyes. Bullmastiffs have a moderately pronounced stop (point at which the muzzle meets the forehead) and dark, V-shaped ears which hang close to the face. They have a flat back and highly set, low hanging tail. They are dignified and powerful in appearance.

Coat and Color
The Bullmastiff has a short-haired red, light tan (‘fawn’) or reddish-brown (‘brindle’) coat with a distinctive dark area on the muzzle and ears and around the eyes. Some white on the chest is permissible. Bullmastiffs shed little.

Character
The Bullmastiff is intelligent, loyal, obedient, and courageous. It builds a strong bond of devotion with its family. Bullmastiffs are highly protective of their family against any perceived threats, but they are much more likely to bowl over strangers than attack, which makes them desirable as guard dogs. They do, however, have a stubborn side which sometimes makes them resistant to obedience training. Some Bullmastiffs may drool or snore.

Temperament
The Bullmastiff can be somewhat dominant toward other Bullmastiffs (males especially do not get along), but is very tolerant towards children and can get along with other household pets provided proper socialization has taken place, preferably when young. Though they would do no harm intentionally, Bullmastiffs should be watched around young children due to their immense size.

Care
The Bullmastiff should be brushed periodically with a rubber brush to remove dead hairs. Trim the nails occasionally and bathe only when necessary. Bullmastiffs do not do well in outdoor heat or apart from their human companions; they prefer a soft bed indoors. The Bullmastiff is susceptible to hip dysplasia and PRA, a genetic disorder of the retina. Bullmastiffs have a lifespan of 9-11 years and litters of 6-10 puppies.

Training
The Bullmastiff is sensitive to the tone of its master’s voice; its handler must demonstrate authority and consistency. Obedience training is recommended for the Bullmastiff, but their stubbornness may make the process difficult.

Activity
The Bullmastiff only requires a moderate amount of exercise for its large size. It will be satisfied with a daily opportunity to run and play on a leash.